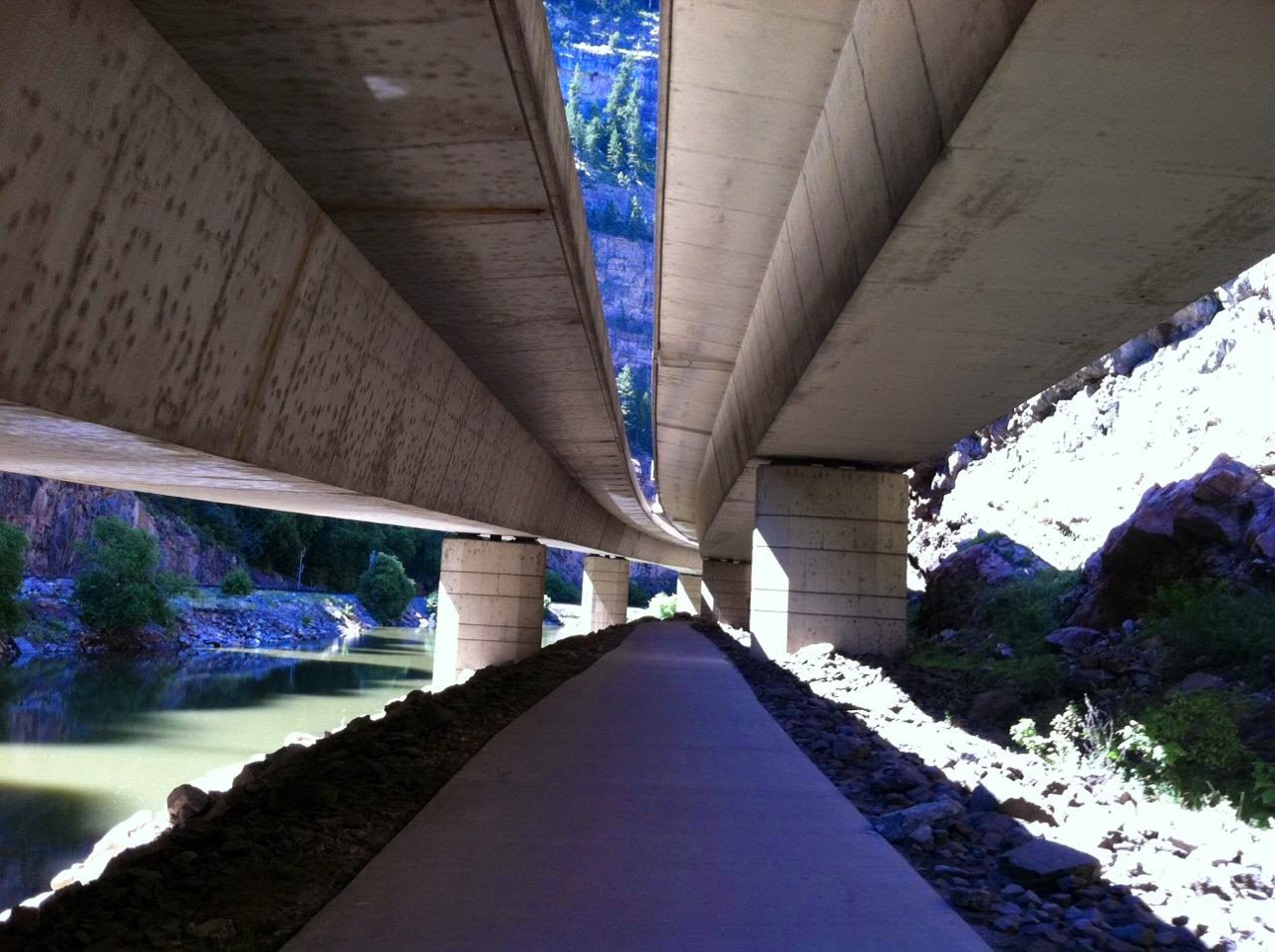 I grew up in the 1970’s, the time of NIXON, Ford and carter. It was a time of polyester, smoking, wide neckties and shame at our perceived strategic reassignment of our objectives in Vietnam.

“International” was on the back burner for America, and when my stupid older brother wanted to quit the Air Force after 18 months, they shrugged and said: “Sure. Okay. Thanks for stopping by.”

Domestic Achievements were the order of the day, and the crown jewel of our vast nation was our Interstate Highway System. We had been diligently linking up all of our nations regions since 1956 and it was all done by the late 70’s! Yay!

Well, almost done. There was one teeny, tiny 16 mile stretch of road that stubbornly defied all attempts at fourlanedom. 16 lousy miles out of 47,714. And that’s where my family vacationed every year.

My cousins moved to a little town outside of Glenwood Springs, Colorado in the early 70’s. And almost every year my Mother would take me and my friend Richard on a two week camping trip.

Our first destination was always the Kellers outside of Glenwood, and from there we would spread out for various adventures. Going West from Glenwood was no problem; I-70 was smooth and wide. But going East was a dangerous, beautiful slog, because you had to drive the old two lane road through Glenwood Canyon.

The canyon itself was gorgeous, and you always had plenty of time to admire it, because the two-lane traffic would always slow to a crawl, or just stop for hours as the road was cleared of falling rock or another big-rig pile-up.

As a tweener I remember the canyon as being kinda unreal, like the dioramas on the train ride at Disneyland. The Canyon was untouchable, unvisitable, because besides from a couple of shallow turnouts, there was no way to interact with the place. No visitors center, no nature trails, no Historical Markers! It was maddening.

Various schemes had been floated over the decades as how to ‘solve’ Glenwood Canyon, but most of them involved blasting the walls of the canyon to smithereens in order to widen it enough. But then in the early 80’s a revolutionary approach was considered that would test the limits of Engineering while being Environmentally conscious.

But this radical plan would have to be sold, to Congress, the President and the American Public. And for THAT, you need Artists Renderings.

And my Uncle, Durlin Keller, was just such an artist. So he did several “portraits” of the Department of Transportation’s vision, and that meant he had the blueprints, and that meant that me, as a terminally curious young man, I got to see the plan before anybody else. Oh, Man.

The cantilevered roadways, flying viaducts and high-tech twin 4,000 foot tunnels were all very fascinating, but what really caught my attention, and my slowly tracing finger was the accompanying Bike Trail, that would wind in and out of the new roadways and would run the entire length of the canyon right next to the Colorado River.

By the early 80’s I was driving, but also working, and so the treasured family vacations came to an end. The Glenwood Canyon project was completed in 1992, 5 months ahead of schedule. I didn’t get a chance to visit until the Oughts, and as I drove through the elevated super slalom I was duly impressed. But my eye kept straining to catch a glimpse or two of the bike trail down below, and I vowed, that one day……

Fast forward to August of 2014, when my dear little Mother was laid up in the hospital in Grand Junction. It was time for me to “come on out”, as they gravely say in these situations. Well, Mom came through her operation fine but would be laid up a few days in ICU until she was strong enough. I would have to extend my stay a bit.

Bang! As soon as she was more-or-less stable I nabbed her car and high-tailed it across the state to Glenwood Springs. This was my big chance to live a childhood dream.

Not having brought my bike with me on the train out here, I opted for a package deal that supplied you with everything you needed: Helmet, gear bag, lock, the same model of hybrid bicycle that I had previously owned, and, very important, a ride in a van upstream to the Eastern end of the Canyon.

Yep, boys and girls, totally cheating and getting a ride to the top of the hill. Bwa-ha-ha!

Our van operator was a dead ringer for Andy Roddick (the tennis player), and I quizzed him about the history of the canyon, the Interstate system and his deadly first serve.

Andy didn’t know much about any of that, but he DID know about the river. Specifically how it loves to demolish parts of the bike trail every year. In fact the tour I was on had just opened for the year (because of repairs), and it was already August.

At the Eastern end of the Canyon, 16 miles up, Andy dumped out our group of 12 adventurers and unloaded the bike trailer. I leaped on mine, asked “Can we go now?!” and at his shrug I was gone. First one of the group away, and I never saw any of my tour mates again.

Sorry everybody, but I need to go be 13 years old again.

And it was……GLORIOUS. The Canyon is world-class gorgeous, but that was only one part of the giddy sensory overload that so wonderfully assaulted me.


The rest of the facilities have also been upgraded: Several visitors centers now operate, along with picnic areas, nature trails, historical markers - even wide, concrete ramps for putting in the river rafts. From underneath it looked like the on and off ramps for these exits would be quite a thrill ride unto themselves.

And I duly noted the signs and slowed down for the picnickers and families who seemed to enjoy stopping and congregating right in the middle of the bike path. Ah, too much time in the car. Been there - done that.

But not THIS day!

In the middle of the canyon the Interstate gets all fancy pants and ducks into the mountain for some serious tunnel action, crossing the top of the ‘U’ that the river seems to like to make right there.

The bike trail, beholden to no one, chooses to follow the river at this point, and so for a couple of miles you are away from the roaring, honking trucker route, and suddenly you are taking a quiet, leisurely ride in the canyon country. Aaaahh…….

It's a delightful interlude. And this is where the Hanging Lake trail begins. So in my sudden tweener optimism, I jumped off the bike, locked it up, and charged up the steeeeep trail to the scenic spot. I made it about 1/4 of the way up before I realized that I was only wearing slick, old Birkenstock sandals, and that these were colossally inappropriate for the terrain represented.

I quietly made a ‘U’ of my own, returned to my rent-a-bike, and continued on downhill.

Downhill. All downhill. I can’t explain how gloriously silly it felt to be barreling through this countryside without having earned all of this coasting. I was cheating. Totally cheating. And giddily so.

I bombed the 16 mile canyon in just over an hour, even allowing for my brief, failure-laden attempt at hiking up to Hanging Lake. So I was dive-bombing down this sinuous serpentine at about 20 miles an hour, on average. Yeeee-HAH!

All the while being continuously assaulted by the beauty of the Earth, the engineering feats up in the Air, the satisfying Fiery exertion of my body under an August sun, and the ancient energy of the fast body of Water beside me.

Hmmm…..Earth, Air, Fire and Water. No wonder my Spirit felt so complete.

I took a selfie at the end of the Canyon, on the bike overpass that takes you across I-70 and puts you on the proper side of the (now calm) Interstate, for the final small stretch back into Glenwood Springs.

And it was a 49 year old man who took that picture - of the 13 year old boy who just completed a lifelong dream.

P.S. Thank yous to the nice folks at Canyon Bikes who did all this for me for only $40.00.

P.P.S. What brought me out to this part of the world in the first place? Read all about it HERE, and then HERE.

P.P.P.S. How weird and wild was the engineering of Glenwood Canyon? Check out THIS fun article from 2004. It's a good little read about the technical, environmental, traffic and wildlife factors - and their effects through the first 12 years. Spoiler Alert: Cars are much safer when you let them go really fast.

Photos: The 1903 and 1969 photos are from the article linked above, so I guess I need to the thank the United States Department of Transportation - Federal Highway Administration.
The 'multiple crash' graphic is from denver.cbslocal.com.
The '4 modes of transport' pic is from coloradoguy.com.
All other pics are mine, most taken at speed!

Support me on Patreon

Like what you read here? Yay! Now head on over to my Patreon page, where most of my posts will now go. For as little as $1.00 you can unlock my latest post each month, and for a little more you can get previews of my books-in-progress, fun posts from my older blogs, oddities from the filing cabinet, and my infamous Gentleman of Leisure reports. It's a fun place, and it allows me to keep my work ad-free. Let's GO THERE!

angusmcmahan@gmail.com
(831) 431-0636
Angus is a carbon-based, bipedal, ape-descended life form who has evolved his thumb-laden hands into two specialties: Writing stuff, and whapping on things in a rhythmical manner.
The rest of his hairy arms are now good at swimming. His legs have been running and pedaling bicycles for decades. And his enormous cranium seems to be engaged mostly in getting sunburned, playing video games, and yelling at the Giants on his TV.